The Fad - Run On Back To You 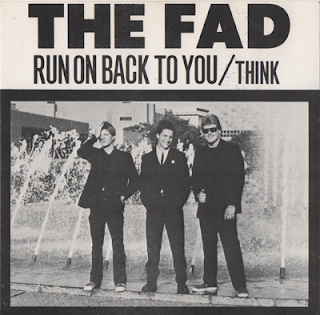 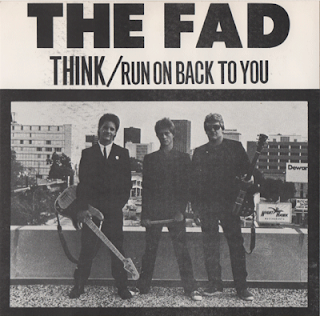 A. Run On Back To You

Bruce Henderson, Ed Eissenstat and David Dage played in a band called the International Broadcasters in Stillwater, OK. Tom Grula, who was also from Stillwater and had dated Bruce's sister, moved to Austin in the fall of 1977 to go to graduate school at UT. When Bruce moved to Austin in 1979 to attend UT as well, they decided to put a band together. After the two of them spent some time rehearsing, Bruce suggested they record a single. So they called on their friend David Dage to come down and play the drums for the recording.

The self-financed session was banged out in a single day in September at a small studio in Austin. After they wrapped up, David went back home to Stillwater to join up with his new band, Reverb. Meanwhile, Tom and Bruce needed a full time drummer in Austin so they could starting playing shows. At the time, Tom was working as a security guard in the Dobie Dorm. He met a fellow UT student named Jay Thiele who was living there and happened to play drums. Naturally, Jay fell into place as The Fad's permanent drummer.

They played their first show in November of 1979 alongside the Big Boys at one of their first ever shows. The Fad continued playing around Austin regularly for just over a year after that and built a small, devoted following by gigging at venues like Raul's and the Continental, as well as dorm and frat parties.

The single, which features two intoxicating, harmony-driven pop tunes with splendid back-up vocals and hooks galore, received favorable reviews while attaining regional airplay and even a few spins on KROQ in LA. They sold out of the meager pressing, leaving them in shops in Austin and selling them at their few road dates in Houston, Dallas, and in Oklahoma.

As Tom was getting ready to graduate UT with a PhD in Chemistry and move on, Bruce decided to head back to Stillwater and resurrected the International Broadcasters. They recorded and self-released a superb five song 12" EP with the original line-up of Henderson, Dage, and Eissenstat, plus the addition of Jim Drummond on guitar. The band only played a single show, their record release party at Sound Warehouse in Stillwater before Bruce made his way back to Austin.

Bruce was neighbors with Larry Seaman, who was playing in Standing Waves. When bassist David Cardwell left the Waves, Bruce stepped in as his replacement. Then drummer Bob Murray left and David Dage was brought down to Austin once again to take over. Standing Waves eventually moved to New York where they shared a one bedroom apartment for a few years. They toured, made records, received nice press and started having major label interest when things finally fell apart.

Bruce stayed behind in New York as the rest moved back to Austin. In the late 80s, his band Hearts And Minds recorded an album for A&M, which was followed in the 90s by a few solo records. He also wrote a highly acclaimed non-fiction book called Waiting, which was published in 1995, and has other writing credits to his name. He now works in the advertising industry. Jay graduated from UT in 1984 with a Pharmacy degree and then in '88 got his PhD in Pharmaceutical Chemistry. David Dage passed away a few years ago. 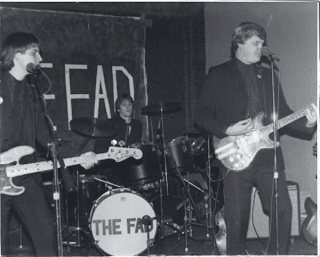 Posted by Rockaround Records at 4:34 PM