D-Day - Too Young To Date 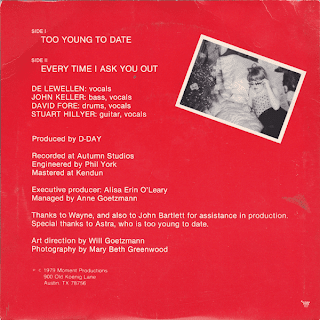 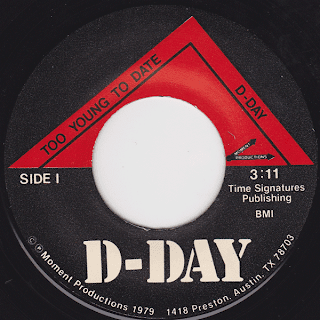 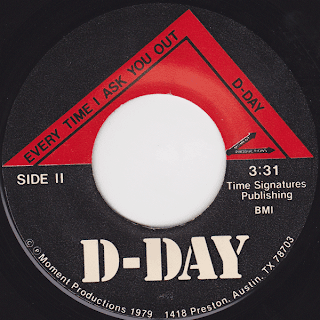 A. Too Young To Date


B. Every Time I Ask You Out


Right To Know (From their second 7")

De Lewellen had first started singing in bands while attending college in Missouri. When she moved to Austin, she joined the original vaudeville troupe at Esther's Follies. By 1979, she noticed the burgeoning Raul's punk scene and wanted to get involved.

Having become friends with David Fore through her time at Esther's, she asked if he would be interested in starting an alternative band, to which he happily obliged. David had previously played drums in iconic TX psychedelic band, Bubble Puppy. He lined up Stuart Hillyer on guitar and a bassist named John Keller.

They started jamming together and the songs immediately poured out. They played their first gig at Esther's before graduating to Raul's and other more appropriate spots. They'd often venture out to Dallas, Ft. Worth and Houston as well.

They agreed to let a fan named Anne Goetzmann become their manager. She, along with a wealthy lady from Houston named Alisa O'Leary started a label called Moment Productions. Their first release was D-Day's "Too Young To Date" single (later releases on the label include the Big Boys, Standing Waves, etc). The partners went out to Los Angeles to promote D-Day and their new record. Stopping at KROQ, they convinced Rodney Bingenheimer to play the song on the air. Shortly thereafter, it hit number 1.

College stations started to pick it up as well, but before long, mothers started picketing the stations, trying to get the song banned because of the lyric, "He just wants to pop my cherry." The song received airplay in Austin as well, on the local KLBJ. In fact, Lady Bird Johnson was listening one time and called the station demanding they never play the song again. Eventually they went in the studio to record over the one line to make it more suitable for radio, though the censored version was never released as a single.

The band gained even more notoriety when an article was written in Penthouse Magazine about the fiasco. So they went out to LA to take advantage of the situation and got to open for the Go-Go's at the Whisky. Continuous west coast touring prevailed as a second single, "Right To Know," became a hit on KROQ as well. By this time Stuart had left the band and was first replaced by keyboardist Glover Gill, followed by Will Fiveash on guitar.

The band was very well received on their road shows and earned slots opening for the Vapors, Nick Lowe, Romeovoid, Psychedelic Furs, Talking heads, English Beat and others. While playing in Los Angeles, an A&M rep saw their set and signed them soon after.

The producer they wanted was booked up, so the band was flown out England to work with Bob Sargeant. He listened to them rehearse and didn't like their "hooligan music," so he pushed them in a much more pop direction. They spent three months in Europe recording the album, but by the time the record came out, they didn't have a management company behind them and they ultimately slipped through the cracks. By early 1984, the band broke up as De and Glover were very unhappy with the new direction and quit.

D-Day could be heard on the Texas compilation "Tales From The Edge" as well as Rhino's "New Wave Hits Of The 80's." 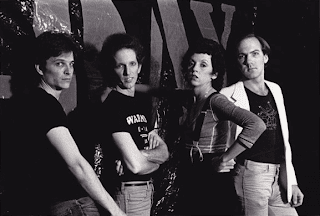 Posted by Cheap Rewards at 3:34 PM