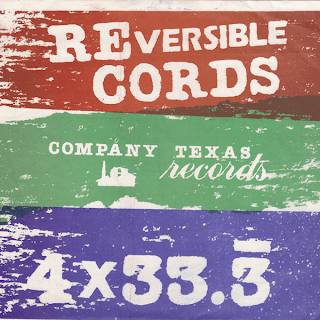 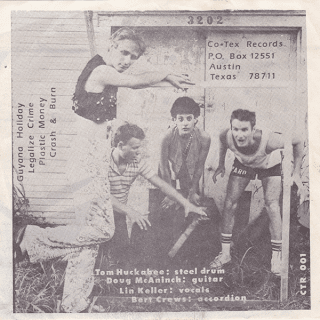 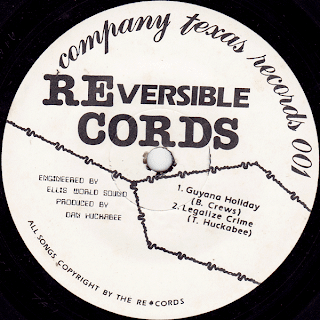 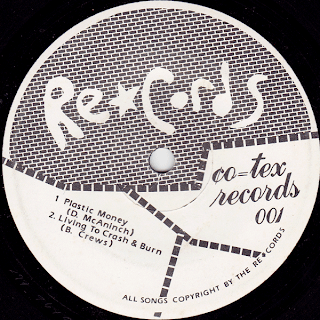 Bert Crews moved to Austin for grad school in 1977. He was in an anthropology program that divided his time between the University of Texas and Cornell University. When he had down time in New York, he’d go to Manhattan and see bands like the Ramones, Richard Hell, Talking Heads and Patti Smith at CBGB’s.

At the start of 1978, Bert was heading back to Austin at the same time the Sex Pistols were touring the South on their short-legged US tour, which brought them to San Antonio on January 8th. Many UT students were in attendance at the Pistols show and the Austin punk scene started developing shortly afterwards.

Recognizing that truly anybody could start a band, Bert got together with a couple friends to form a short-lived group called the Raybees. They wrote original material but never performed live. By the time summer rolled around, he had become friends with Ty Gavin and the guys from The Next. Bert was taking care of a huge 5-bedroom house for a geology professor who was away, so the band promptly moved in with him. Bert occasionally played keyboards with the Next but that was not meant to be.

Doug McAnich was the brother of one of Bert’s friends from Houston. Since he was in Austin attending UT that fall, Doug and Bert began rehearsing and writing songs together. In September, Lynn Keller also moved to Austin to attend UT. She was in the RTF program like many others in the budding punk scene, but didn’t know anybody yet. One day she was on a shuttle and met Ty Gavin. He asked if she wanted to play in a band. Though she grew up singing, Lynn had never performed in a band before. Ty introduced her to Bert and Doug and they gave her a tape of some of the material they’d been working on. A week later she performed with the Reversible Cords at their first ever gig at Raul’s on Halloween night with The Next.

Ty played drums with them for a little while but Bert wanted the band to become more portable, where they could play gorilla-style and not have to set up and break down a whole drum kit. By that time they had become friends with Tom Huckabee, who was playing with The Huns. He came on board as their steel drum player, which allowed them to play wherever they wanted; not just in clubs, but in coffee houses, burger joints, and on “the drag,” which was the strip of shops and eateries that ran along the western edge of UT campus.

The band, which would become known as the Re*Cords, continued searching for new outlets to play besides Raul’s, which was the one punk club in town. In mid-December they tested the waters at the 1206 Club, a real dive on the sketchy, east side of town. The openers were Boy Problems (who shared members with the Huns) and Motor Men, a short-lived group containing John Dee Graham and Sally Norvell. They had formed from the ashes of another band called Cold Sweat, who coincidentally were the opening band for the Huns during the notorious “bust” a few months earlier.

Following the 1206 show, Burt and Doug joined forces with Sally and French Acers to form another band called the Norvells. From that point on, the Norvells and Re*Cords became an entwined entity, along with the Huns. They all shared members and played gigs together. Also, Sally was married to Huns’ front man Phil Tolsted at the time.

On Valentine’s Day, 1979, the Re*Cords played their first “random” show, an acoustic set on the drag. After that, it became routine for them to set up and play anywhere they wanted. Near the end of February, they played in the parking lot before an Elvis Costello show and they did the same before an Alex Chilton show the next month. Shows at the 1206 club only last through April; an incident involving Legionaire’s Disease Band from Houston and a knifing contributed to that. Undaunted, the Re*Cords continued their mobile act through different areas of the city, including sidewalks on the east side and in front of the capital building.

Bert lived with Nick Modern who made Sluggo! magazine. Since Nick had an offset press, it was easy for the Re*Cords to print up tons of show posters and canvas the town with them using wheat paste. One such instance got them into a bit of trouble with the authorities. Short on blank paper, they grabbed a stack of 1040 IRS tax forms and printed the details for a show they were playing at Raul’s on March 2nd. While the idea was conceptually unique, the government did not approve of the defacement and came looking for the culprits. Though the incident resulted in probation, the show still went off without a hitch.

Later in the year, Dan Puckett left the Huns to focus his attention on his other band, Radio Free Europe. Bert was asked to fill in for the Huns' last few gigs. Shortly after that, things came to an end for the Re*Cords as well. Tom graduated and was moving to LA. Bert followed Nick Modern to San Francisco for what he intended to be a 4-5 day stay, but he never left. Lynn was working with Chickadiesels and Doug went on to start his career.

The Re*Cords have two records to show for their year-long existence. The first was a 7” EP that was recorded on 4-track reel to reel and released on their own Company Texas Records imprint. Tom’s brother, Danny, had a multi-track studio in Dallas and had encouraged them to go up there to record some more songs. A combination of what they laid down for him and other material that Bert had recorded along the way were collectively put together for their posthumously released LP. The album included a lot of overdubs, unlike their first record, and it contained contributions from many people in the Austin punk scene who played coronet, violin and an assortment of other instruments. 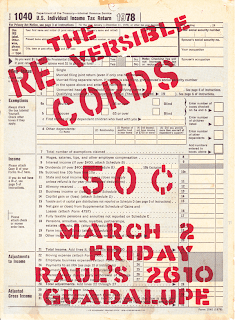 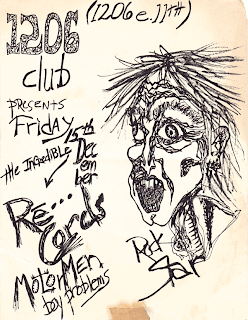 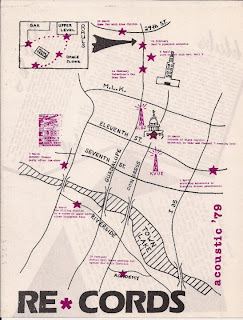 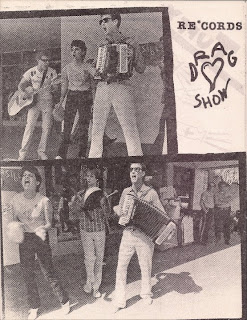 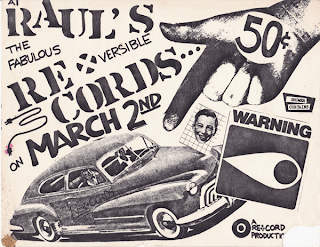 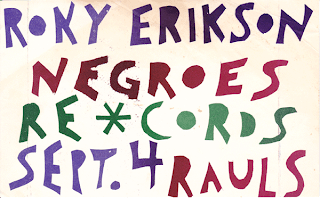 Posted by Cheap Rewards at 5:26 PM