The Pengwins - Life After High School 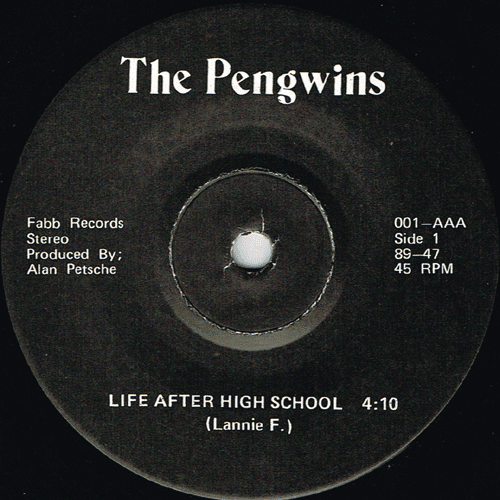 A. Life After High School

Lannie Flowers grew up with equal affinity for the sun shiny pop sounds of the Beatles and the dark mystique of the Velvet Underground. Other early influences included British Invasion groups such as the Rolling Stones, the Who, and the Kinks, as well as the early glam efforts by David Bowie, Mott the Hoople, and T.Rex. His fondness of the heavy Detroit sound of the MC5 and Stooges predicated his appreciation for the punk rock era that was coming right around the corner. It was the DIY aspect that he loved most about it and he latched onto it like a duck to water.

Lannie was about eight when he got his first guitar, although he was still into baseball and didn’t put much effort into the instrument until the age of 12. It was then in the sixth grade that he started what eventually became the Pengwins. That’s when a friend of his from up the street named David Hamrick brought an electric guitar to show and tell for Christmas. All the girls were gushing over him so Lannie figured he needed to get in on the action. After school he went up to David and told him he also played guitar and they should start a band. They then asked their friend James Laxon who played drums to join and they were on their way.

Somehow they talked the organizers of the high school beauty pageant into letting them play during intermission. When they were jamming on stage girls started screaming and afterward high school girls talked to Lannie, the ones that otherwise wouldn’t have given him the time of day. So in his 12 year old mind, he knew he was headed on the right path. The band began playing dances and parties wherever they could secure gigs with an ever evolving cast of members until Lannie was about 16. At that time the Pengwins consisted of Lannie on guitar, David Bryan on drums, and Delbert Raines on bass. In 1977 Alan Petsche joined them on guitar.

At first they wanted to be Mott the Hoople crossed with Badfinger, playing melodic music with an attitude. Then punk came along and there was plenty of attitude to go around. They didn’t want to be just like the rest of the bands in the area. When Cheap Trick’s first album came out Lannie realized that’s what he has been trying to do. They replaced the jangle with more of an edge.

In 1978, the Pengwins did their first recording session on a Teac 4-track recorder in the room where they practiced with no outside producers or influence. Five original songs were laid to tape but just three of them surfaced on the “Life After High School” EP. They paid for the meager pressing of 500 copies by playing a couple of gigs. They had to do sets full of covers in order to get paid in the small town of Kennedale, which is just outside of Dallas, where no one wanted to hear music that wasn’t on the radio. Unsurprisingly, the Pengwins record didn’t sell very well there. They ended up giving most of the copies away at gigs. They did receive a favorable review in the local Buddy magazine but didn’t get positive reinforcement from any other media outlets.

Their problem at the time was that they were too different for the average Joe but not unique enough for the hard core punks to fit in with the DFW scene. They realized they had to travel to find their audience. They kept busy playing frat parties and high school functions throughout the state. Eventually they were traveling so much that the band became their full time job and in 1981 they were only home about 90 days out of the whole year. The early 80s had them opening for Thin Lizzy and Cheap Trick amongst many others. They even shared the stage with Badfinger and the Guess Who, who were still grasping for life.

The second Pengwins record came out in 1980, a self-released single featuring “Don’t Be A Girl About It” and “Small Vacation.” 500 copies of the single were pressed and it fared slightly better than their debut. Not only did they have more experience recording by that time, but they used an actual 24-track studio, Buffalo Sound in Fort Worth. Danny Wilkerson who took David Bryan’s spot on drums in late 1978 played on the record and contributed to the writing of the songs. Danny and Lannie would become the band’s primary songwriters for the next several years.

The Pengwins continued to record between 1981-1984 but none of it ever saw the light of day. 1981 saw them touring England for a month, mostly playing around the London area where they met a lot of interesting people. They were excited to find their new single was in the jukebox of a pub they went to. They returned home after running out of money but continued to stay on the road for the next several years, even making their way out to Alaska. In 1985 Danny stopped touring with the band but took on a managerial role.

It wasn’t until 1988 that the Pengwins released their next record, a six song EP that had great distribution and achieved moderate success. The next year Danny was able to arrange a demo session at Bearsville studios in NY with Rick Derringer producing. Then in 1991 they went to Memphis and laid down four more tracks with producer Jim Dickinson who had just done the Replacements Please To Meet Me album. A couple of those songs made it to compilation CD’s but for the most part all their work was for naught. With the grunge era fast approaching, there was no longer an audience for the Pengwins music.

They had come close to a record deal a few times but something always fell through at the last minute. Eventually they decided enough was enough and the band ended following a very long run with countless line-up changes and endless recording sessions. They played their final show in Fort Worth and called upon all former members to show up and play. The event made the front page news of the Fort Worth Star Telegram.

Lannie built a recording studio in his garage and has continued making music, refusing to succumb to the corporate world. He’s released several acclaimed solo records in recent years and remains an active performer. Alan and Delbert started the Aaron Avenue Records label in 1994 and have released work by Lannie and other Texas artists. Danny’s continued to play drums in other groups including a cover band called The Waltons with Lannie. He’s also a commercial real estate broker and was Mayor of Annetta North. The Pengwins play reunion shows on occasion.

The song “What You Gonna Do” which was recorded during the Pengwins first recording session but never released was recently featured on the Texas power pop compilation album, Radio Ready on Cheap Rewards Records. 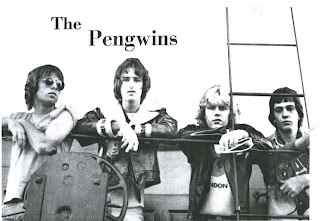 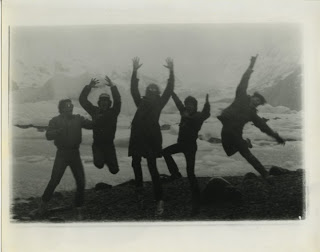 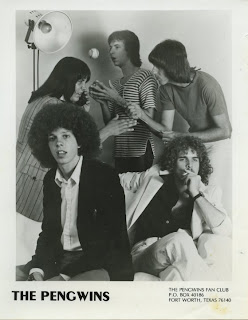 Add comment
Load more...
Older Post Home
Subscribe to: Post Comments (Atom)
The purpose of this blog is to share some of my favorite punk, power pop, and KBD-style records with others who have a passion for discovering great, lost music. My focus is on obscure 7"s from the late 70's and early 80's with a strong emphasis on Texas groups. I typically interview multiple members of each band to ensure accuracy in the information I share in regards to events, time periods, pressing information, etc. In cases where members cannot be reached, I'm hoping this blog will be a means to connect with them so I could continue to gain knowledge and share that information with others.