The Haskels - Taking The City By Storm 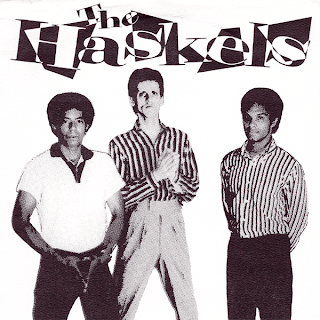 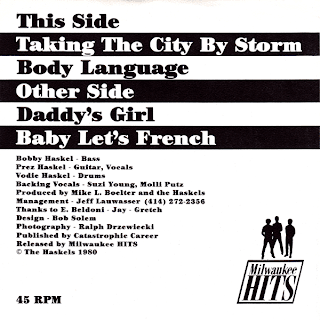 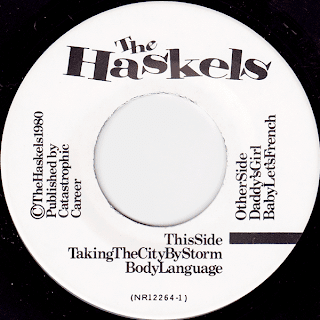 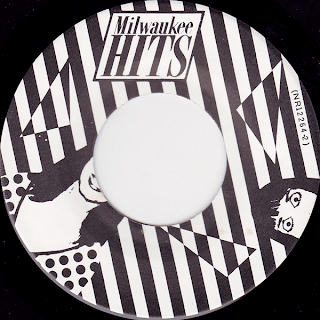 A1. Taking The City By Storm

Richard LaValliere started playing bass in bands when he was 12 years old. By the time he was 16, he was playing the Midwest bar circuit upwards of six nights a week, three to five sets a night. While in between bands in the mid 70s, he started jamming with his brother Gerard on guitar. Around the same time he answered an ad placed by a 16 year old girl named Jill Kossoris who was looking to join a band. Their mutual interest in Patti Smith sealed the deal.

Meanwhile, Jerome Brish was playing guitar and singing in a band called Marilyn with Scott Krueger, Caleb Alexander and a rotating cast of drummers. They soon morphed into In A Hot Coma. After Scott and Caleb left the band, Jerome merged with Richard, Gerard and Jill. Scott went on to play in numerous bands, most notably The Orbits and later, The Shivvers.

In September of 1977, Jerome walked into an instrument repair shop to put up an ad for a drummer wanted in a "rock and punk" band. The clerk, Guy Hoffman, mentioned that he played drums. So they exchanged numbers and about a month later Guy received a call to come check out a rehearsal at Jill's place.

Guy had been selected by his school to play concert snare drum when he was just nine years old. The instrument felt natural to him and within a couple years he received enough pieces of a kit to form his first band, The Griffins. From then on, he played in a myriad of rock bands leading up to this encounter.

When he went over to Jill's house, he was graciously greeted by Jill's mom and taken to the basement where the band was rehearsing. He liked what they were doing, a combination of originals and covers from the early 60s. The only criticism he received was to "play harder," a sentiment even Jill's dad encouraged!

Soon after that, Jill, who was playing electric piano and had no real input into the band's sound, decided she wanted to write her own songs and go in a different direction. So she left and started the Shivvers while the remaining four continued on together, changing their name to the Haskels.

There weren't any places that catered to the new music that was starting to come out of the basements of Milwaukee. So Jerome (who would change his name to Presley Haskel) and Leroy Buth (of the Lubricants), convinced a local bar owner named Damian Zak to start hosting bands playing original "punk" music in his venue. While he thought the idea was crazy, he reluctantly agreed. Before long, the Milwaukee underground music scene exploded with a diverse group of bands.

No longer having the luxury of Jill's house to practice in, the guys moved their rehearsals to the basement of the dingy 4-plex they were living in off Brady and Arlington, which was coined the Haskel Hotel. They started playing their first gigs at Zak's in February of 1978. Before long they were pulling in crowds of 200+ and ruled the scene along with the Shivvers. The Haskels got to open up for touring bands like Iggy Pop in the fall of '79 in support of his New Values Tour.

Around November of 1979, Bobby Mitchell, who had moved to Milwaukee from Cleveland early that year, was cruising by North and Humboldt. He noticed some guys lugging gear into Zak's, so he asked one of them what was going on. Presley said he should come back later to see the bands that were going to be playing that night. So Bobby returned to the club that evening and got his first taste of the Milwaukee punk scene.

Following a gig on New Years Eve, Richard and Guy decided to leave the Haskels. They would go on to start another project called the Oil Tasters with Caleb Alexander. The group's instrumentation included sax, bass and drums and they released several records in the early 80s.

In need of a bass player, Presley asked his new friend Bobby if he could play so that he could keep the Haskels together. Bobby auditioned and got the job, and then Vodie Rhinehart came in on drums. They played their first show with the new line-up in February of 1980.

After only a few more weekend gigs at Zak's, Jerome started looking for a new spot to play shows. He found a venue called the Starship that was run by a drummer named Kenny Baldwin. Jerome helped convince him to start hosting punk bands, much like he'd done for Zak's a couple years earlier.

Gerard stuck with the band for only a short while longer, leaving after a Summerfest gig in July of 1980. He would go on to join Clancy Caroll in his new band, the Dominoes. Meanwhile, Gerard was also running sound at the Starship, which by this time had really taken over the role as the punk rock club in Milwaukee. Gerard's brother Doug, who was playing in the Prosecutors at the time, also ran sound at the club. It's interesting to note that Kevn Kinney of the Prosecutors (later Drivin' N Cryin') was the roadie for the Haskels.

At this point the Haskels were now a three-piece. The original four-piece line-up had Presley and Richard both writing songs and sharing vocal duties. The new version took things in a different direction (some would say power pop). Reworking a couple of old standards ("Daddy's Girl" and "Baby Let's French"), along with a couple fresh tunes, the band self-released a four song EP in late 1980. "Taking The City By Storm" was later featured on both the Bloodstains Across The Midwest and Killed By Death Vol 8.5 compilations, though the other three songs on the 7" stand up just as well, if not better.

By early 1981 Bobby decided to leave the group, reconnecting with Gerard in the Dominoes. Vodie stayed on just a little while longer with a replacement bass player before moving on as well, which resulted in the imminent demise of the band.

After the Oil Tasters, Richard and Guy both continued playing music. Guy most notably played with the Bodeans and for many years with the Violent Femmes, while Richard most recently played in Polkafinger. Jerome was senselessly killed in 1991.

Besides the 7", a couple other Haskels recordings were released in later years. Mark Shurilla, who was a journalist with the Shepard and played in a band called the Blackholes, was planning to make a record documenting the scene in the late 70s. So the Haskels recorded some songs in their basement for him, but the album never materialized at the time. It wasn't until 1997 that two of those songs ("It's Hard To Smile" and "Drop The Bomb") eventually surfaced on Shurilla's Great Lost Brew Wave Album.

A few years later, another Milwaukee compilation surfaced entitled History In 3 Chords, which included two other lost Haskels songs ("Liberace Is Coming" and an early rendition of "Baby Let's French"). These two were recorded in a studio and intended to be the Haskels first 7" but technical difficulties prevented it's release.

All four of the previously mentioned songs were of the original four-piece line-up, not the version of the band that recorded the EP. 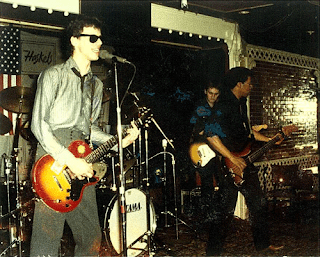 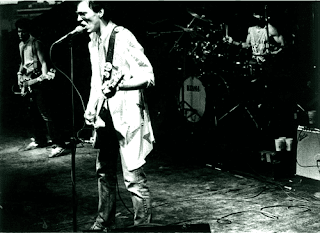 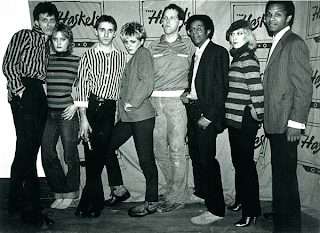 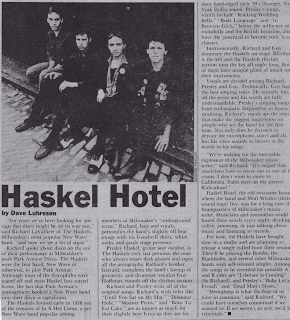 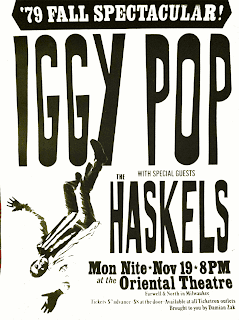 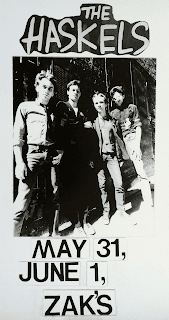 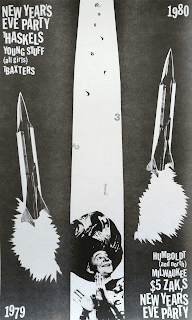 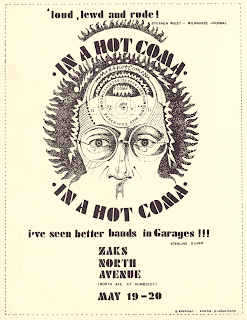 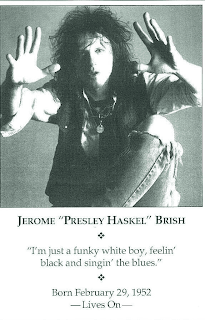 Posted by Cheap Rewards at 1:50 AM