Bodysnatchers - Are You Into Destruction 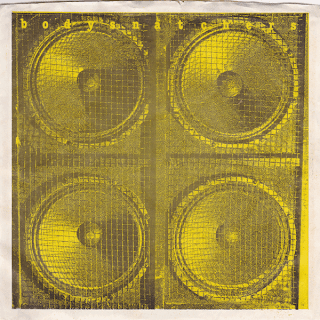 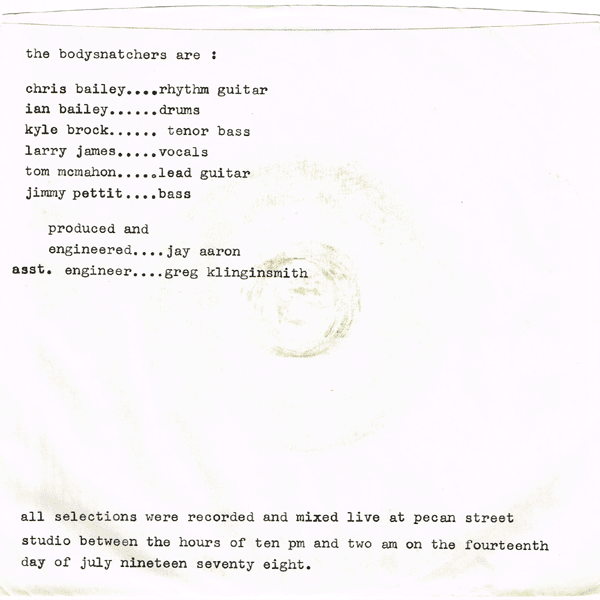 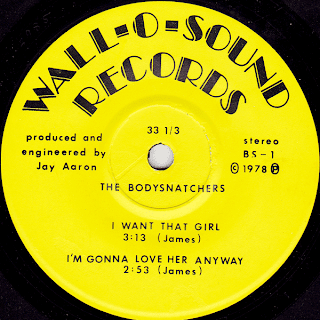 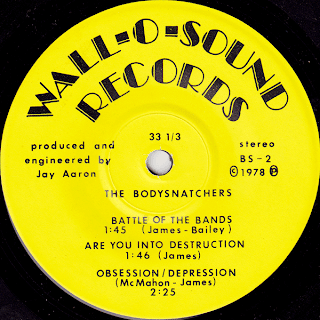 A1. I Want That Girl


A2. I'm Gonna Love Her Anyway


B1. Battle Of The Bands


B2. Are You Into Destruction

Larry James and brothers Chris and Ian Bailey were living in Southern California in the mid 70s, playing in what could be described as a Texas roadhouse band called The Kid. With Larry's Texas roots, he had turned them on to artists like Willie Nelson, Doug Sahm, and ZZ Top, so their output was a mix of rock, country and blues. In 1975, they started getting heavily into funk and started leaning their music into the direction of a funk-influenced hard rock group.

Shortly after that they moved out to Austin where they started a funk-rock band called Daddy Longlegs. By the end of 1977, Larry, Chris and Ian started rehearsing with Tom McMahon and Kyle Brock in another group called The Bodysnatchers. They paid homage to 60's garage bands by playing songs by the Yardbirds, Love, Creation, and others. It was around that time they started hearing about the "punk" thing that was going on in New York and the UK, but it had not yet hit Austin.

Then on January 8th, 1978, the Sex Pistols played Randy's Rodeo in San Antonio. Excited to see the spectacle of London punks playing to a crowd of rowdy, skeptical Texans, the show turned out to be everything they had hoped for; a full-on, nonstop war between crowd and band. And as it would turn out, many of the kids in the crowd that night would go on to form the first wave of punk bands in Austin including The Next, The Huns, The Skunks, The Violators, Standing Waves and more.

Following the Pistols show, it became apparent they needed to adapt the punk aesthetic with the 60's thing they were already doing. So Larry started writing songs like "Mama, What's A Punk?" and "Are You Into Destruction." By this time a failing Tejano bar on the drag by UT campus called Raul's had started allowing the newest upstart punk bands like The Skunks and The Violators to play on off nights. With the help of a friend who played in a band called Project Terror, whose drummer was dating one of the Violators, the Bodysnatchers booked their first gig at Raul's in early 1978.

On April 22nd, a "punk and new wave festival" took place at a newly opened downtown club called the New Atlantis. All three of Austin's punk bands at the time, The Skunks, Violators, and Bodysnatchers, along with The Nervebreakers from Dallas and Chatterbox from San Antonio, were to face off in a battle of the bands competition. It was the first high profile punk/new wave event in Austin and it drew a large crowd. In the end, the Nervebreakers edged out the competition, taking home the big cash prize of $250. The Bodysnatchers felt they had been cheated out of a win and believed The Nervebreakers had a pre-arranged agreement with the club to get a $250 payout since they traveled the furthest, which would have ultimately meant the battle was rigged. This led to the Bodysnatchers' angst-ridden song, "Battle Of The Bands," in which they challenge The Nervebreakers to a rematch.

Another thing of note about the New Atlantis gig was that it was the first time Jimmy Pettit would appear on stage with the band. Prior to The Bodysnatchers, original bassist Kyle Brock played in Eric Johnson's band. Having an obligation to Eric the night of the battle, the 'Snatchers brought Jimmy in to fill the spot. He attests that they chose him because his girlfriend had recently given him a short Sid Vicious haircut and it had nothing to do with his abilities. Regardless, they all hit it off and decided to keep him on board, along with Kyle. So after that, they'd play shows with two bass players, Jimmy playing the low parts while Kyle played more of a lead style with lots of fuzz and feedback.

A local musician and producer named Jay Aaron Podolnick came out to see the 'Snatchers play a gig at Raul's and was blown away. Jay had previously worked with Kyle on Eric Johnson's Seven Worlds album and offered to produce a record for The Bodysnatchers. So they went in to Pecan Street Studios in downtown Austin and laid down five songs for an EP in a single session. It was recorded live to 1/2" tape and mixed on the fly with no overdubs. With its summer 1978 release, The Bodysnatchers 7" EP marks the very first independently released punk record to come out of Austin, pre-dating The Skunks' "Earthquake Shake" by several months. It is believed that 500 copies were pressed. The thin paper sleeve has caused most every copy in existence to have unsightly ring wear on the back cover.

The Bodysnatchers had always intended to be a fun band and never took themselves too seriously, but their strong musical ability caused their authenticity to be questioned by some of the members of the punk scene. Gary Floyd, who would later lead The Dicks, once proclaimed, "You aren't punks, you're businessmen!" As fate would have it, the band fully ran its course and split up in August of 1978. Kyle was keeping active with other projects and Larry wanted to do a more commercial sounding, straight-forward rock band, which would become known as The Rocking Devils.

The Devils began with Larry, Jimmy, Ian, and Chris from the Bodysnatchers along with Joe Eddy Hines. After just a couple rehearsals, though, Chris departed. He met Bevis Griffin at Raul's and they started a band called the Skyscrapers. The two eventually joined The Shades and then went on to play in the Bats and Banzai Kik.

Larry moved out to LA in 1982 and played in a couple bands called Hot Heads and Magic Black Snakes. Jimmy later played and toured with the Flatlanders and Joe Ely (who coincidentally was recording in the same studio at the same time that The Bodysnatchers did their EP). Ian went on to play in the very first incarnation of Standing Waves as well as an early line-up of F-Systems.

Tom McMahon briefly played in The Explosives, appearing on their first EP. He was also part of a short-lived band that toggled between the names The Other Guys and Walking Baby Bird that featured a young hair stylist named Terri Laird, who would later become known as Texas Terri. The band he played in that was closest to achieving success was the female-led new wave group X-Spand-X, who released a four song EP produced by Earle Mankey. Rusty Keith, who played in The Vendettas was in an early version of the band, then ex-Bodysnatcher Kyle Brock came on board in his place. Kevin Tubb was also in the band. He had previously played in the final incarnation of The Shades who were responsible for the Ward & June Never Understood EP, which Tom also lent some guitar licks to. 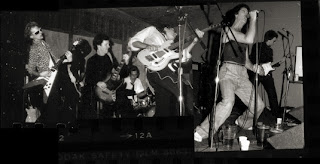 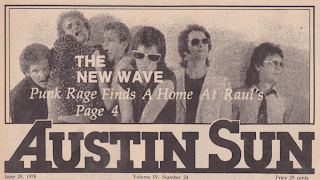 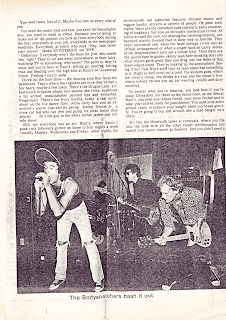 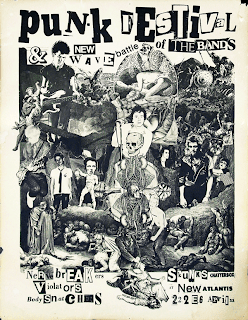 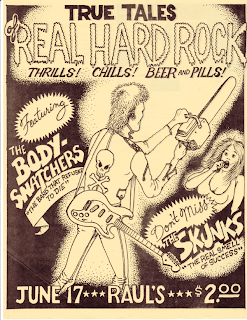 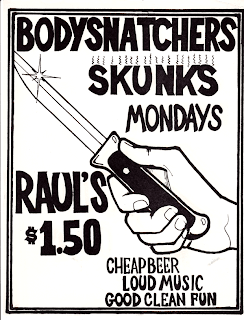 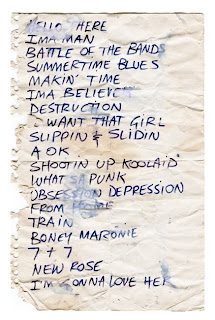